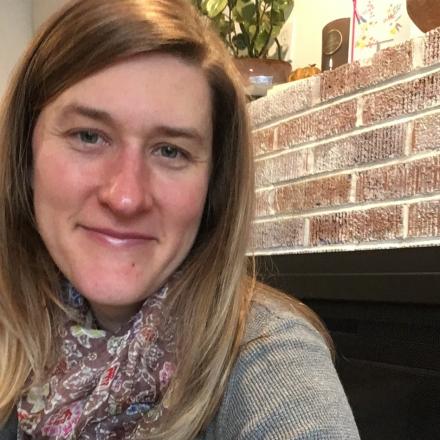 Back to all students

What was I doing before DRBU?
Working as a Speech Language Pathologist helping children with disabilities learn to talk. I was also practicing Buddhism with a Soto Zen community in Oregon.

Influential class I’ve taken:
Buddhist Hermeneutics 1 and 3. The first Buddhist Hermeneutics class really helped me clarify what the Buddhist tradition teaches with regard to how one knows what is true and reliable. I found the answer quite compelling. I believe it offers a significant and hopeful alternative to the kind of postmodern nihilism that is prevalent in many academic and cultural circles. Buddhist Hermeneutics III is also great. Really delving deep into the Buddhist teachings on “no-self” is clearing up many past misconceptions around this term. “No-self” is not a dreaded nothingness I once feared it to be. Rather, I’m learning that these teachings on no-self point to a recognition that who I am changes and what I will become can be cultivated in negative or positive ways. This is really rather freeing and inspires me to engage in my life so as to cultivate more compassion and understanding in the world.

Influential book I’ve read:
I think I now understand something of why the Lotus Sutra is such a beloved text. That book really contains multitudes. It will go as deep as you want and keep going, which is very satisfying, both as a book that supports spiritual insight and practice, but also as an incredible work of art. I so appreciate the way one can keep turning and turning the metaphors and they will keep offering new meaning.

Concept that blew my mind:
Much of Jean-Francois Lyotard’s The Postmodern Condition: A Report on Knowledge. He describes how the values of increasing efficiency and productivity have influenced which types of scientific technologies humans have developed. Because of this, Lyotard suggests the very lens through which we measure and analyze the world are biased to see that which will enhance productivity and efficiency. The implication is that all realms of knowledge, even the so-called unbiased realm of science, is subject to conditioned filters.

How has DRBU changed me?
DRBU has given me the confidence to trust my own ability to think deeply and to trust that this thinking is relevant to the larger conversations in our present day society. I can follow long strands of nuanced argument in a way I could not before. This is deeply satisfying. I have also learned to trust that when I quiet my own mind and look deeply into a line of inquiry, this stability of mind brings new insights that were not previously apparent to me. It's really a delightful phenomena. Kind of like a superpower!

What surprised me about DRBU?
1. That academic study was essential to understanding the Buddha Dharma. Before I thought if I just meditated enough I would “get it”. In actuality, my Buddhist practice has been deeply enriched by a better understanding of the technical terms, the logic, and the symbols in the Buddhist literature. Understanding issues of translation and dialoguing with practitioners from the actual Asian traditions from which these ideas came has also really helped broaden my understanding. I feel I can be a more responsible steward of Buddhist ideas for a Western audience as a result of these learnings.

2. That meaning and insight emerges from a conversation between engaged peers instead of from only myself in isolation. It is always so satisfying to go to class with only a vague idea of what a text is talking about to emerge several hours later realizing the group process had uncovered significant and valuable insights I would not have come to on my own.

What’s your service scholarship (work study) job?
In addition to cleaning and doing dishes, which I actually find really relaxing and grounding, I also have contributed to the community by offering some of my professional services as a speech language pathologist to a few people in the community who could benefit from it. I have also used my more general skills as a professional (organization, writing skills, attention to detail) to assist other projects at DRBU such as the Arts Initiative.

Do you have a daily practice— if so, what is it?
Broadly speaking, I try to encounter my life as a place of practice and ongoing learning. To support that, I also meditate regularly and take a mindful walk in the back campus as often as weather permits. I enjoy attending evening ceremony a few times a week. Oh yeah, and I regularly ask the Buddhas and Bodhisattvas for help. That’s important!

What do you do for fun?
I like to hike and go out to dinner with a friend or two. I sing in a little group of women from the broader Ukiah community. I also like to cook for others and have a board game night now and again.

How has financial aid played a role in your being here?
I already had some significant debt from previous schooling. Simply put, I would not have been able to pursue studies at DRBU if it had not been made affordable to me through financial aid. For that, I am grateful.

What’s next?
I want to support the expansion of opportunities for mindfulness, community, and the learning of Buddhist ideas to anyone who wants to benefit from them. I think this stuff really lessens suffering and leads to a connected and meaningful life. It has for me anyway and I would like to help make that available to others. I don’t know what form I will pursue supporting the values of mindfulness, community, and Buddhist learning, but I know I am committed to working for these things in some way.