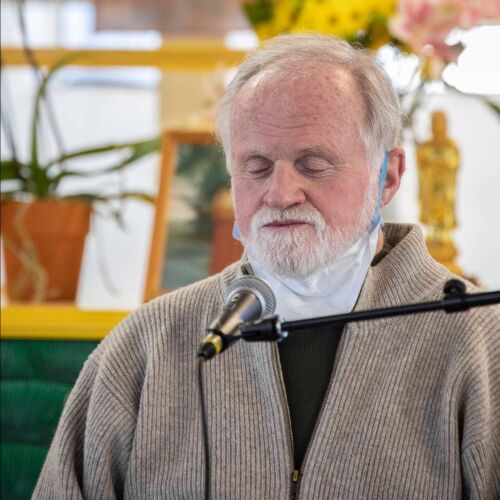 The terms “chan” in Chinese and “zen” in Japanese are both phonetic transcriptions of the Sanskrit term dhyāna. Chinese tradition explains dhyāna as “stilling thoughts” (ch: 靜慮 jìng-lǜ) or “deep concentration.” It can refer to the various meditative states of stillness and focused awareness. The mind of the practitioner, once freed from distractions, experiences discernment and insight in progressive stages of depth and clarity. Dhyāna is also sometimes described as a preliminary condition of entering samādhi—a non-dualistic state of awareness arising from deep concentration characterized by purity, lucidity, and tranquility. In this sense, chan, or “great samadhi” (ch: 大三昧 da san mei) is a more enduring, pervasive, and sustained state of liberated awareness that does not depend on a specific meditation exercise or period of time. As with most forms of Buddhist meditation, chan and zen is not strictly speaking a meditation style as it is a quality of mind—the ability to see events clearly in the present moment and to respond appropriately.

Chan is not just sitting on a cushion trying to think nothing. Nor is chan just “entering samadhi” or trying to get enlightened. Chan isn’t something you get; it is someone you become. Chan, or dhyāna, is a total way of being and living—alert, aware, centered, and free of error whether walking, standing, sitting, or even in sleep. This is called the “great samadhi” or also “the single-practice samadhi”—a state of dynamic equanimity that is 24/7 “everywhere engaged, but nowhere attached” (The Sixth Patriarch’s Dharma Jewel Platform Sutra). Chan is the mind functioning at its highest potential—unobstructed, unbound, liberated. It is the most complete and fulfilling way of being a person. A taste of chan is a taste of freedom.

Chan is also a practice, a contemplative exercise. But the practice only comes about because we lose sight of our “original face,” our true nature; we forget who we are. The practicing of chan, then, is only to remind, restore, recover. That is why chan is called “the great return, the great reversal.” In chan, the only motion is returning, the only method, letting go. This is why Chan masters of old called it “going back to the root; returning to the source.” Chan Master Xuyun (Empty Cloud) said that chan only becomes necessary because we get confused, entangled, stressed-out in a dust storm of our own making (Ch'an and Zen Teaching). Chan settles the dust, unties the knots, and clears the air. This is the other meaning of chan: a contemplative practice of stopping, stilling, deep looking and listening to oneself so as to recall and restore the lost mind/heart.

In chan, there is nothing to get, or even to seek after. But there is something to do: master the technique of seeing through and letting go. Or as Xuyun says, learning “to light up the mind and see the nature.” So chan is waking up to things as they are, and to what and who each of us might be. Chan practice, as distinct from chan being, consists of acquiring the know-how of “letting the mind be unattached, clinging to nothing” within and without, at all times and in all places. The fine art of true letting be takes practice, training, discipline, and honed awareness (sila, samadhi, prajna). This skillful art of becoming a fully awake and functioning person in the highest sense is called doing chan.

Why meditate? It isn’t for calm and stress reduction exactly, as meditation actually can, maybe, should disturb more than it tranquilizes. Yes, it is to “still” the mind, but only so as to activate it in another way. To meditate is to quietly question. It is to keep alive the big questions: who am I, or who is this? If we are only born to die, what are we to make of the brief interval between? If I don’t meditate, sheer laziness and denial will move these questions to the margins of awareness and drown them in the trivialities of day-to-day existence. They won’t go away; they cannot; but they will hibernate, lie dormant underneath the layers of false consciousness, doing their mischief in the twisted, distorted way all repressed ideas and emotions do. At the very least they manifest as an incessant “doing” activity, driven-ness riding on a current of free-floating anxiety. As this can often be masked as “success,” “matters of consequence” as the Little Prince would say, few people will notice our malaise, and think it normal, even exemplary (setting goals, being ambitious, competing, gaining name and fame, high-achiever). Meditation, then, is for listening to yourself, knowing yourself, “returning the root; going back to the source.” Meditation, then, is at the very heart of living the examined life. “Everything is made from this mind.”