DRBU Professor Jin Chuan Shr shares reflections about a recent tea time circle with students and faculty. Below, he captures some of the lively conversation about service and a few photos from the day.

The circle began with Dr. Rounds, DRBU President, sharing, “What is service? I believe what we are doing at DRBU is we are saving the world, one false thought at a time. It’s easy to see how anger spreads like a wildfire, or a virus; but kindness and compassion spread in the same way, influencing the people around us, rippling out into the world. One DRBU graduate recently emailed me saying how her DRBU education prepared her for being in the world. She says that her self-cultivation has increased since leaving DRBU; she was now applying self-cultivation in her daily life.”

A student asked, “How does one start cultivating this love of service?”

Dr. Rounds replied, “This service has to begin with yourself. Compassion for yourself. Generosity for yourself. You have a right to be happy. If it is not in the Bill of Rights, it should be. And if you are caring for yourself and being generous with yourself, that will naturally flow out to the people that you interact with and you will care for them as well.”

After Dr. Rounds, students and other DRBU members shared their questions and thoughts on the topic of service. Hasan Friggle, one of the orientation organizers, shared his opening question for the discussion: “What is an act of service? What does it mean to perform an act of service? Who are we performing an act of service for?” He started with his reflection on the question, “The first time I visited a monastery in upstate New York where I heard a Dharma talk from a nun who was very funny and had a magnetic charismatic presence. Her talk was on cleaning toilets!

“She went into great detail on all the work involved, and it was not a clean job, of course. You have to really get in there. And the point that really stuck with me was that after she cleaned the toilet, the first person to use the toilet was her. And she was really pleased that she was the first person to use this very clean toilet. And so I thought about how when we perform an act of service to the community, you are benefiting yourself in some way. Taking care of yourself, you are also benefiting the community.”

Nahelia Aguilar, the orientation coordinator, then jumped in and shared how growing up, she did not think about serving someone else. Rather, her thoughts revolved around what she had to do, was asked to do, or wanted or needed. But coming to DRBU, this was something that really surprised her. She said, “I remember seeing Angela during my first year at DRBU doing all these tiny acts of service without being asked for everyone. She was putting the dishes away, cleaning the surfaces… she didn’t say anything, it is hard to capture it. There as a particular energy, it was so… selfless! So whenever I saw her doing something, I would try to imitate that. I would go over and help her. And she without saying anything, would give me the things that we needed to do, and we would do it together. And without saying anything, I realized that we were doing it not for us, but for us. And that really changed something. It was so… touching. It touched something in my heart that I never felt before. 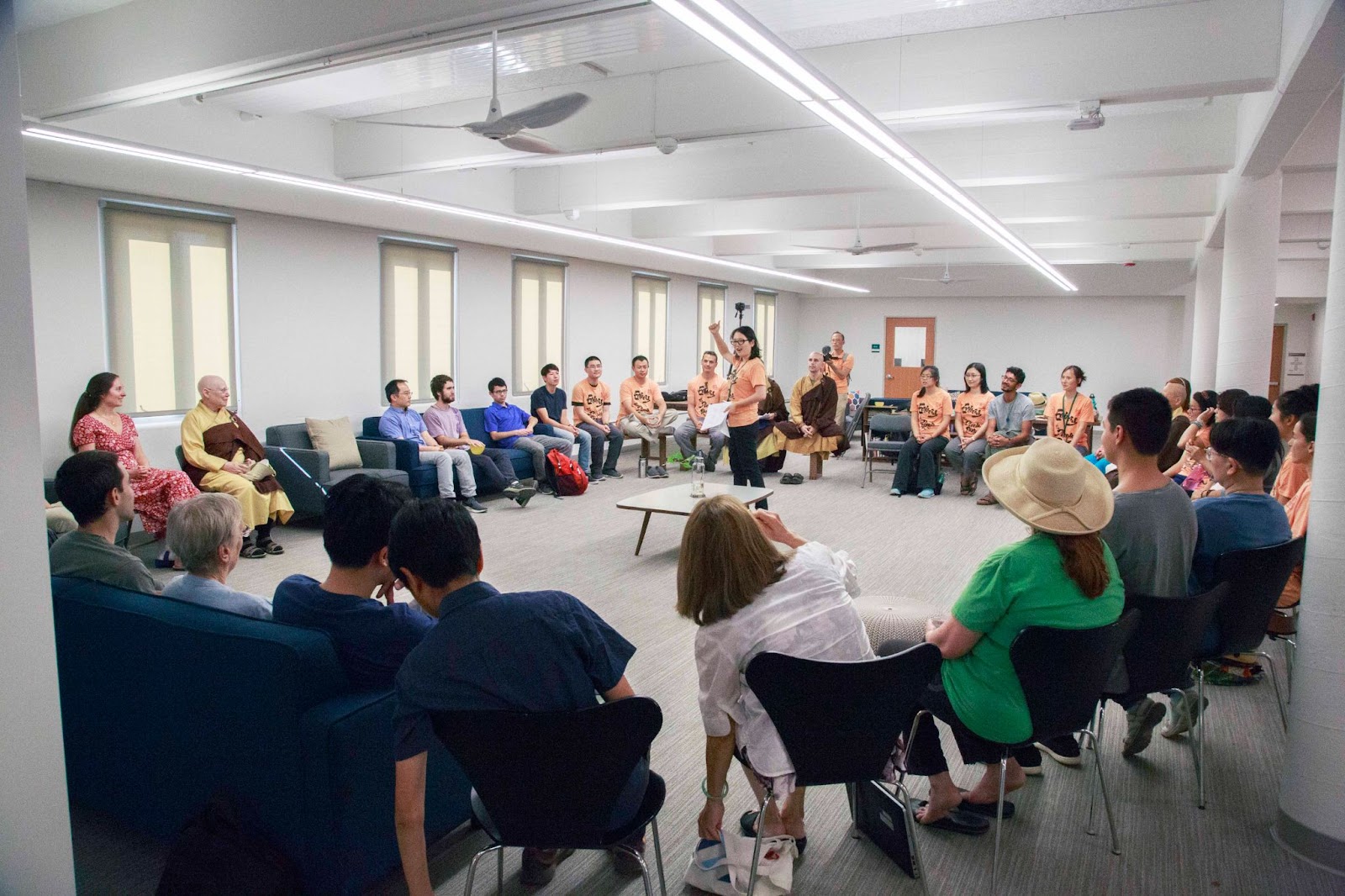 Angela [in the center] welcoming everyone in NSO 2018, Opening Circle

“And then I remember washing the dishes in the big kitchen with the nuns. We never spoke. We would just wash in silence. We would do our best without saying anything. It was very moving. I realized that by doing things without being asked we can make a positive impact on those around us, by making them feel a bit more comfortable that the place is clean. Just having that state of mind, changes your energy. I really felt lighter and happier.”

Kind acts rippling out in DRBU

Sophie, a new MA student, reflected how in Chinese culture, women often are expected to serve in the background—cleaning and so forth—but this can lead to forgetting about taking care of themselves leading to resentment and unhappiness. Again, highlighting the importance of self-care, that service begins with oneself. If we serve from a place of obligation, or seeking appreciation, approval, and so forth, it can lead to burnout. As a further reflection, Xiaojuan, a DRBU staff member, shared how in contrast to the attitude of obligation and societal pressure, “service done skillfully with an open heart,” Xiaojuan shared, “can lead to liberation.”

“Service also applies to our cohort,” Brandon (MA’23) added, “The more open and vulnerable we can be in shared inquiry allows the conversation to go deeper. We are in service to each other.”

Dealing with Difficult Moments
Near the end of the conversation, a student tentatively asked, “What was the most difficult time for you in CTTB/DRBU, and how did you solve the problem or make the situation better?”

“Oh Boy!” Dr. Rounds began. “After my husband and I first moved here to CTTB, he told me in 1976 that he wanted to become a monk—which was not in the game plan for my life!

“And here I was, I moved across the country, became a disciple, and then… Wow. I remember exactly where I was walking… I felt a lot of anger… as you can imagine. I was feeling all this anger at my husband, and I realized that, ‘Whoa! If I’m angry, I’m letting someone else control what I’m feeling.’

“That was one of those moments, ‘Oh my Lord! Whoa!’ I cannot say that I have never gotten angry again in my life, but that was such a profound moment for me. It turned around my whole way of thinking because usually with anger you think, ‘I have the right to feel the blues. I have the right to be angry with this person. How dare he!’

“And how did I deal with it? My personal practice is recitation of Guan Yin, so that was how I dealt with it, among other things. So to me, recitation is what you do instead of constantly playing the mental tapes, the resentment tapes, the ‘I wish, I could-a, should-a’ tapes, the ‘why didn’t I’ tapes, all of those. You don’t do that; you just recite. That was my tool and is still my tool until today.”

Activity: Serving Each Other
The circle continued with everyone doing an act of service for each other, giving each other an offering: flower arrangements, origami butterflies, and a laid-out fruit plate. Pictures below. 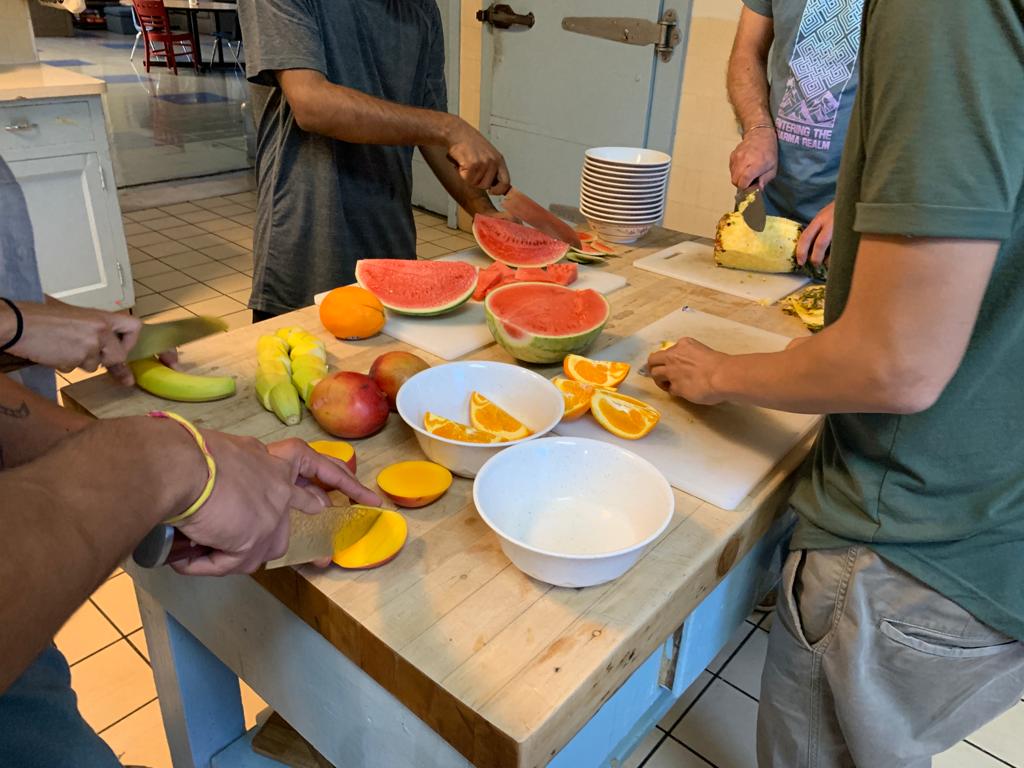 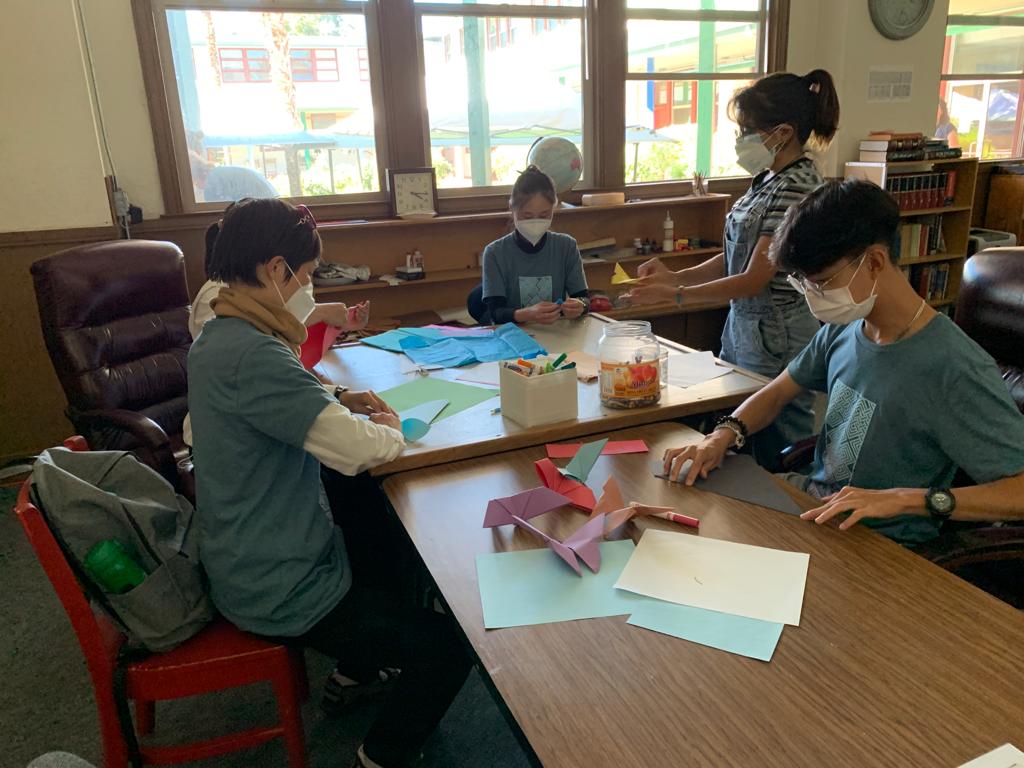 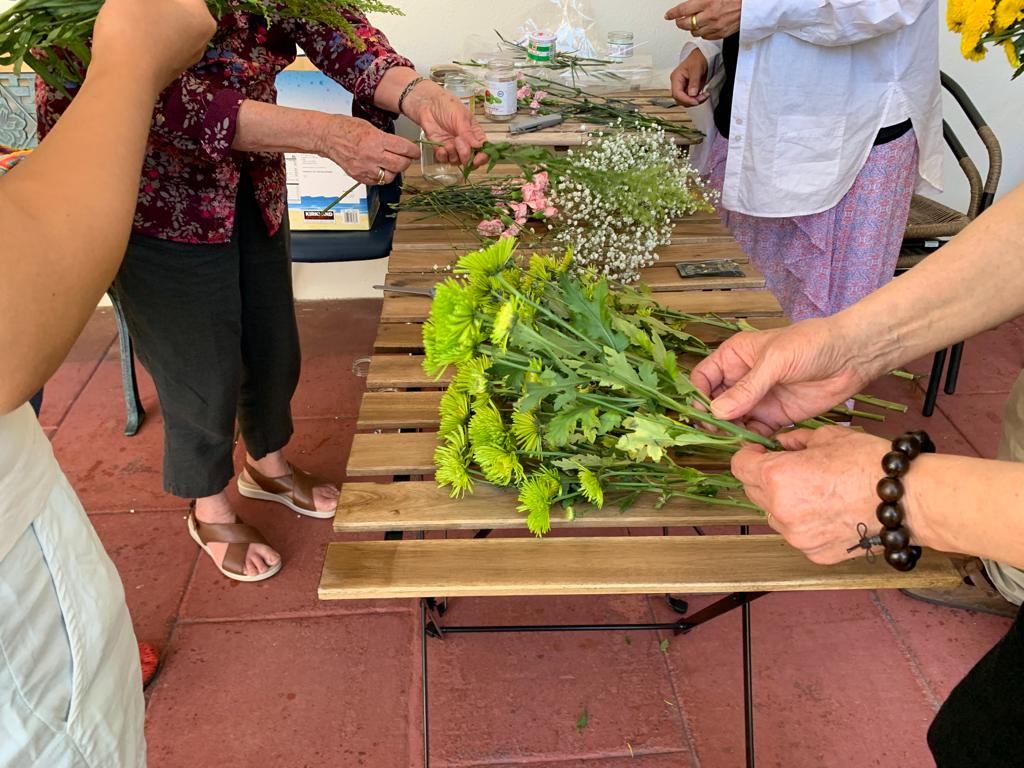 The fruits were then served to everyone, and the origami butterflies (with positive messages in them) and flower arrangements were gifts for the new students. A bit of beauty and care for one’s dorm room!

As a final activity, Hasan introduced a variation of the “Secret Santa” (which traditionally consists of giving gifts to one another anonymously during Christmas). Hasan explained as he walked around with a bowl of names, “Pick a name. This is an invitation to do an act of service for this person during the course of the semester. No pressure. No obligation. An invitation. And if you can do it as invisibly as possible. That’s why it’s a secret!” Maybe we can call it “Secret Bodhisattva”?

May the acts of service continue to ripple throughout the year…

And of course, cleaning up after the event… 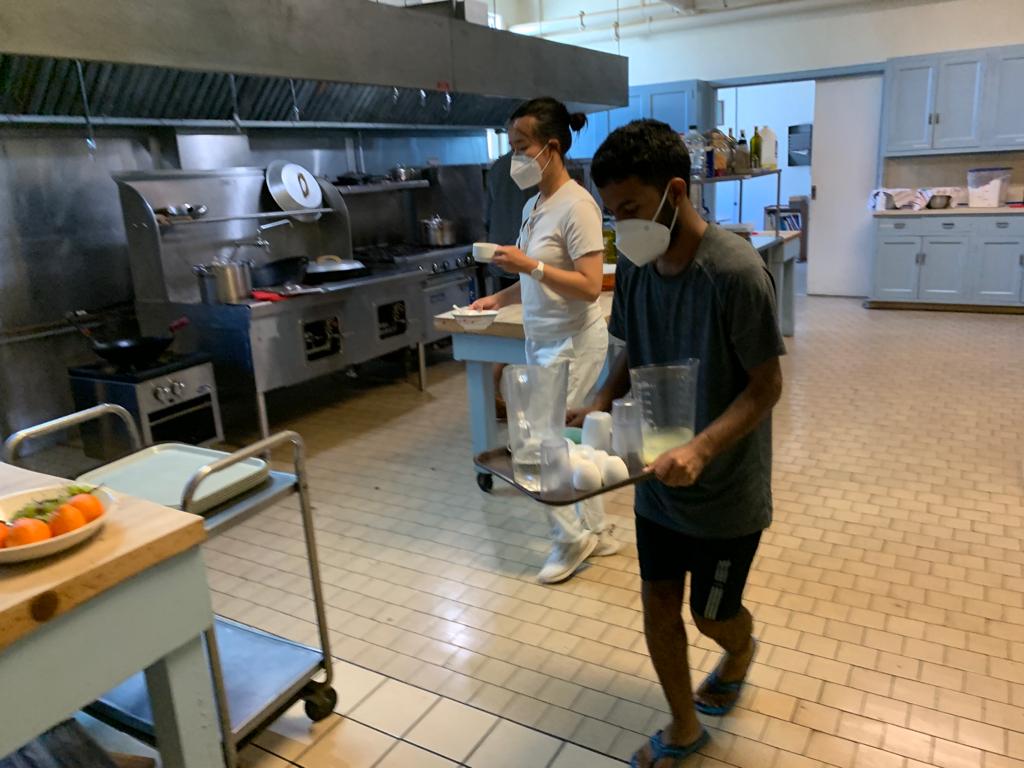