An introduction of Jainism with Dr. Wiley of UC Berkeley 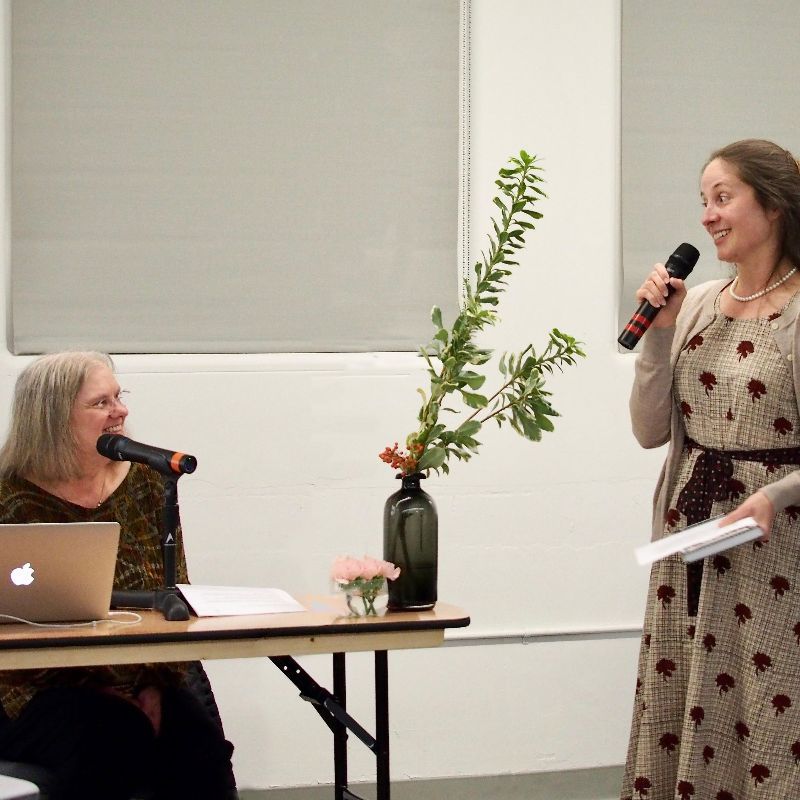 Dr. Kristi Wiley gave a lecture, An Introduction to Jainism, on November 7 at DRBU. The lecture covered basic beliefs of Jainism, including the concept of the 24 Jinas or “Spiritual Victors” in our cycle of time, Mahāvīra’s teachings regarding the nature of reality, and the emergence of the four main sectarian traditions: Śvetāmbara, Digambara, Sthānakavāsī, and Terāpanthī.

Dr. Wiley has been a lecturer in Sanskrit and South Asian Religions in the Department of South and Southeast Asian Studies at the University of California, Berkeley. Her area of specialty is Jainism.

Below is a transcription of the question and answer portion of the lecture:

Guest 1: Thank you so much for your talk; it was wonderful. You mentioned at the very end the question I had in my mind, and briefly touched on it, but maybe you can say more. You said the souls that become liberated go to the top of the universe, so I just kind of wanted to hear more about that. Since the souls are immortal once they become liberated, what is their destiny?

Dr. Wiley: Once one attains perfect knowledge, perfect conduct, and omniscience - you’re going to live until the karma that keeps you alive, your lifespan karma, until that’s used up. At the point that that’s used up, then the soul is rid of the karmas that cause its embodiment. At that point, the analogy is sort of like a gourd in water. A gourd that is released from rocks that would hold it down shoots directly up to the very top of the universe. At the top of the universe, it doesn’t go any further because past the top there’s no motion or rest. They cannot travel beyond the limits of what the occupied universe is. There’s empty space beyond that, but they come to rest there because you can’t move any further. So these souls are individual, they’re unembodied, and they’re non-material, but they’re said to have roughly the same shape as the body they left had, and they exist there forever, the soul experiencing its own consciousness energy and bliss. It’s constantly sort of changing, it’s a self-referential kind of thing. Basically it’s an idea of just experiencing its own consciousness and bliss, for eternity.

Guest 2: What kind of meditation methods did they use?

Dr. Wiley: Meditation has not played a large part, traditionally, historically, in Jainism. Fasting and various forms of austerity is the main thing that people have done, historically. There’s not a lot known about some of the earlier practices of meditation, other than the fact that they existed, that they talked about them. But in order to overcome desires, in order to get rid of your passions, those were only done in meditative states. So they  were done primarily by monks and nuns, and they had various things that you meditate on. A number of them would be things like the fact that you are responsible for your own liberation; the fact that the cycle of death and rebirth is unsatisfactory; these kinds of things. Now in recent times, along with the same group that had the Terāpanthīs who did the sumena and sumenis that went to the West, they’ve instituted a new form of meditation called priksha dyāna. And that is based roughly similar to Vipassana meditation in Buddhism, and that’s been practiced both in India and the West. They’ve also tried to make it more available to everyone. In other words, not tied into having to believe in the Jain tradition in order to do it, so it’s similar to that.

Guest 3: Professor, thank you for your lecture tonight. So my question has two parts. You mentioned earlier that Jainism has kept its monastic tradition for over two thousand years or so - to what do you credit that continuation? It’s not a small feat to be able to keep all that continuing all this time. My second question is, Jainism has been a small part of India in terms of population; has that always been the case, or has it been some time period where it’s more or less?

Dr. Wiley: Yes, so as far as is known, Jains have always been a fairly small community. It’s possible that there were more than there are today, probably were more than there are today. But what percentages I don’t know, but they have never been a dominant community in India anytime during history. Not to the best of my knowledge. Now, how did the mendicant community keep going - that’s another good question. No one knows for sure; perhaps because they were, and still are, itinerant, moving from place to place, they sort of never really settled in one place. So it was not that easy for invaders to come in and destroy monasteries and this kind of thing. Also, because there was such a close relationship between the mendicants and the lay people, there’s some thought that because of this sort of relationship between the two of them, that this may have been a factor in the reason why Jainism and the mendicant community continued to survive. Now, the mendicant community has gone through a number of reforms, and for sure they now that there were many fewer monks and nuns at the end of the 19th century than there are today - that for certain is correct. And, like anybody else, the mendicant community became lax during certain periods of time and then they would go through reforms, and, you know, get back to stricter practices. And one of these was at the end of the 19th century when the lay community even were encouraging the monks and nuns (primarily the monks) to not live this life of sort of luxury in one place where they were getting possessions and so on. So they went through a sort of a cleansing period and revived, at the encouragement of the lay people, sort of got back to more basics and that then encouraged more people to renounce, so the community of monks and nuns has been on the rise in the 20th and 21st centuries.

Guest 4: Were there schools or what was their education? How did they perpetuate their tradition?

Dr. Wiley: It was a guru-shishya type of thing - so you would have the monks, primarily the monks, though the nuns could do it also. You would learn from your teacher, your preceptor; they would have rankings within the mendicant community. They had a mendicant leader (still do) called a ācārya; so he’s the teacher, then they had preceptors under him...a lot of it was oral, so they would learn from their teachers, then they would have disciples and teach them. So it was...it was in a (hopefully) unbroken lineage and that was part of what made their teachings legitimate, was that the teacher was proper to teach that thing to them. That’s also why conduct is important because if you had lax conduct, you weren’t a proper teacher. The texts were eventually written down in the 5th century, Sri Tumbra texts were, but prior to that it had been all oral. Within the Digambaras they have separate textual traditions - the earliest one of the Digambara tradition is 156 of the Common Era. That’s the earliest written text of theirs. But a lot of that was still oral also.

Guest 5: Thank you for your wonderful lecture. I had a question about the elemental beings. I was wondering if the Jains also saw elements like fire, air, as being building-blocks of material reality and if that means the sentience of those elements coexists inside other sentient beings that are made up of those elements, and how that would work?

Dr. Wiley: The answer to the question is no, they don’t have that view. I know exactly the view you are talking about, and it’s a different view. Earth, water, fire, and air are not the elemental building blocks of matter. That is a different idea.