How Do I Meditate Properly?

This is the first of a series of meditation instructions, transcribed from talks given by Dr. Verhoeven at DRBU. Here he talks about the importance of a two-fold dimension to meditation that often gets overlooked- study and practice.

Meditation is generally presented as consisting of two elements: cessation and contemplation, or calming and insight. The great 6th century meditation master, Zhiyi, compared it to the two wings of a bird. To fly, the bird needs both wings. With only one wing, the bird just flops around. Although Chan meditation doesn’t use the same language as Shamata-vipassana, it also presents meditation as having two essential elements: sila (morality) and dhyana (lucid concentration). But there is another two-fold dimension to meditation that often gets overlooked, but is equally important—study and practice, or better stated, study-with-practice. 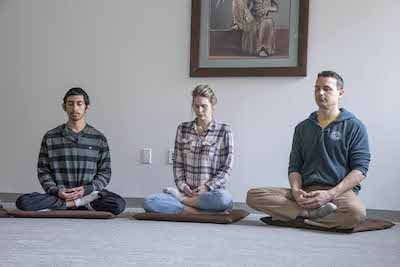 Textual learning and contemplative practice also act like Zhiyi’s two wings analogy above. They need each other to “fly.” And just as Zhiyi pointed out that these two aspects (cessation and insight) act like the two wings of a bird, or the two wheels of a cart, he warned if one side is cultivated disproportionately, then one falls prey to mistaken excess. So too with study and practice. If one aspect is cultivated disproportionately, one misses the mark. Study without practice is sterile; but practice without study is blind.

It may seem strange to you that I am talking so much about textual learning when the topic is meditation, which some people mistakenly feel has nothing to do with books. But rigorous study is an indispensable prerequisite for meditation. Investigation of the texts (sutras, shastras, vinaya) provides the philosophical and psychological basis, the theoretical schema for meditation practice, like a reliable map for a journey into unknown lands. It is the first ‘wing.’

The other ‘wing’ is the actual training of the mind, the body, and the emotions. Together, these form the bedrock of what is called ‘self-cultivation.’ Good theory, the close reading and understanding of the sacred texts, is a kalyanamitra (‘good and wise friend’), a trusted guide, for navigating the deep ground on your being. Good theory trues and steadies practice. The Buddha himself pointed this out as he was nearing the end of his life. Ananda worried that without the Buddha they would have no teacher. But the Buddha rejoined, “Ananda, that is not the correct view. The teachings and the vinaya which I have taught and enjoined upon you is to be your teacher when I am gone.” The teachings, dhamma/Dharma are passed along directly from teacher-to-teacher (inspired tradition), and in the sutras (received tradition). As the Avatamsaka says, sutras are:

They act for late and ancient as a constant rule.

My teacher lectured the sutras every day, sometimes three or four times a day; so essential did he hold them to our training and cultivation. Even if you are lucky enough to find a good teacher, you still should examine the canon; how much the more so if you cannot find a good teacher. The word used for this learning is not just “read” or “study”, but “uphold” which means more like ‘embody’ ‘internalize’ even memorize. Study and bowing, study and sitting, study and chanting. They must go hand-in-hand. Over time they develop into an ongoing inner dialogue of sorts that keeps you honest and corrects course. They mutually respond: theory guides and informs the practice; practice tests and confirms theory. Theory suggests; practice decides. Theory is compass, practice is sail, to use another analogy. 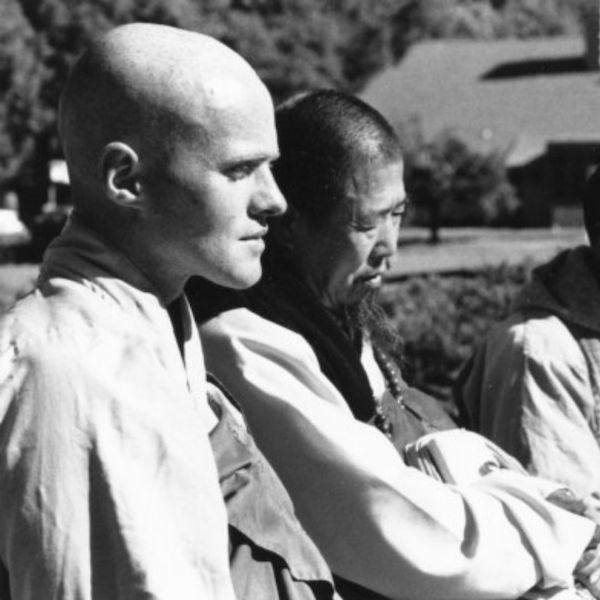 Quite remarkably, these ancient texts come alive with practice; and, your practice starts to catch fire kindled by the texts. The more you practice, the more the texts “make sense” and open to you; and more intimate the texts become. As a result, your practice cuts and clears and connects. Your being enters another world, a bright place of awakening (bodhimanda) sustained through practice and understanding, rubbing and polishing. As the Avatamsaka Preface says, “seeing and hearing act as seeds. . . understanding and practicing in one’s person.” This method is self-sustaining. If you attend enough classes, stay grounded in the teachings, and have the basics down, you can continue on your own without the need for a monastery, temple, or teacher. You take the teachings as your teacher, and your practice as the monastery. This is called the “direct teaching.” It is very immediate, accessible, straight on. As the Sixth Patriarch Huineng says, “The direct mind is the place of awakening; the direct mind is the Pure Land.”

If you just sit in meditation, however, without a firm foundation in morality and theory, your meditation easily drifts and flounders; or, descends into potpourri of experiences (“spiritual sight-seeing” as one master called it). Your practice drifts and flounders into states of mind (jing jye). You alternate between the fascinating, fearful, and fancy—one after the other without rhyme or reason or reach. On the other hand, if you just study and you don’t practice, you become entangled in head-games of “mere words and language,” also known as “head-mouth zen.” This can be clever, witty, seemingly profound, but it’s still only abstract ideas, mere intellectual posing and posturing—called, “flowers in space” and “dream-thinking.” Nothing real happens here; no transformative liberation takes place. The ideal thing is for the theory and practice to occur together, as when two hands rub together and wash each other. One hand cannot scrub itself. Both are needed to get clean. This two-pronged methodology, I would argue and was taught, is absolutely essential to success in contemplative practice.

Sitting meditation is, however, only one form of practice. There are many “doors” or methods, thus said to be “84,000.” None is intrinsically better than another, however, some people prefer meditation because it seems so complete, so simple and direct, and brings everything together in a very tight experiential package. Moreover, you can meditate with a minimum number of accoutrements, images, statues, even the monastery itself.  It’s particularly modern, portable and inexpensive. You do not even have to buy those expensive meditation seat cushions with exotic covers and stuffings. You can just use a folded towel for a cushion if you like, or no cushion at all, and sit on the floor. That does not mean, however, that sitting meditation is easy; it may in fact be harder than other more gradual practices. Why? Because meditation brings you into direct contact with your own mind, and that can be daunting terrain. It’s said that “everything is made from mind alone,” and nowhere is this truth more evident than when you are sitting quietly alone with yourself. John Milton, not a Buddhist, wrote in Paradise Lost, “the mind is its own place, and in itself can make a hell of heaven and a heaven of hell.” The Avatamsaka Sutra says,

Able to paint the worlds:

The five aggregates are all born thence;

There’s nothing it doesn’t make.

It is this busy, mad mind that one meets in meditation. Stopping and contemplating, purifying and quieting the mad mind. . . how could this be simple or easy?