The Labor Day Daylong Retreat was the first daylong retreat in the DRBU Self-Cultivation Program. This retreat occurred on September 3, 2018 and aimed to immerse participants in different methods of meditation. DRBU Dean of Academics Dr. Martin Verhoeven provided tips on how to improve meditation, while DRBU Chaplain Jin Chuan Shi introduced the Shurangama Mantra Heart as an option that could be used to develop focus in walking and sitting meditation. Afterwards, participants did a shared inquiry over excerpts from “Opening the Dhamma Eye”, a Dhamma talk by Ajahn Chah.

Written by a DRBU MA student

At most universities, Labor Day would be a marker of a longer weekend. At DRBU, however, Labor Day became a day dedicated to spiritual practice. Students, staff, and faculty gathered in the DRBU Chan Hall to deepen their understanding of meditation and self-cultivation within the context of the DRBU mission statement.

The morning began with a meditation talk by Dr. Martin Verhoeven. His lecture focused on the physical and mental aspects of meditation. He advised that meditators should sit on the edge of their cushions, with their legs in a relaxed and alert position, regardless of whether one is sitting in half lotus, full lotus, or otherwise. He emphasized that the sitting position should be done without hurting oneself. The back should be straight in the sitting position, but not arched. “Let this,” he said while patting his stomach, “be relaxed. The rest of the upper body should be relaxed as if hanging from the spine like silk.” He continued that the hands, held in a palm-up, slightly cupped manner, are positioned with the left hand cradled underneath the right, thumbs gently touching. He explained that the touching of the thumbs acts to “close a circuit.” If, during meditation, the thumbs were to drift apart, it signals that one of the shoulders has stiffened up and we have lost focus on our meditation topic. This serves as a physical cue to relax and return to the meditation topic.

He continued that the ideal meditation position involved aligning the ears, shoulders, and hips. He suggested that the head should be tilted downwards a little bit, eyes opened slightly to let a little bit of light in, the tip of the tongue gently touching the roof of the mouth. All these elements serve to align the meridians of the body and help the flow of chi. He said that checking in with following these guidelines during meditation would help us be mindful of maintaining proper posture.

Then, he described four methods for breathing in meditation. The first three are incorrect ways. The first is “the wind blowing” style of breathing. He asked, “Does anyone know what that is?” After observing the puzzled expression on the participants’ faces, he proceeded to make the sound of strong wind through his mouth and later through his nose. He explained that this expends too much energy and is distracting. The second method is “broken breath.” He demonstrated by truncating his intake of air into two parts, doing the same to his exhale. “This disrupts the chi.” The third method is the “one you see in the martial arts movies.” Marty then closed his eyes and stiffened his upper body, clenching his jaw as he inhaled dramatically and exhaled with a rumbling sound produced in his throat. Opening his eyes, he proceeded to describe the stereotypical scene in martial arts movies during which there is a monk who is breathing with extreme focus and power, able to jump immediately out of meditation into channeling magical powers to defeat his opponents. The fourth and correct way of breathing in meditation is breathing as one does naturally. Marty advised that everyone should not breathe solely in their chest but down to the stomach area, where the dantian is located. The dantian is the center where the body’s energy is stored.

A student raised a question: “How do you suggest we breathe if we’re congested or sick?”

“Well, you could try sinus clearing meditation,” Marty replied, yet warned, “but you have to be careful of the type of side effects these medicines give you. You don’t want to be too energized or extremely drowsy during meditation. You could try using a Neti Pot to rinse out your sinuses, or you could ultimately try to breathe as comfortably as you can through your mouth.”

Marty then gave methods for keeping the mind focused during meditation. He emphasized that our method of counting the breath or reciting with the breath should follow the breath, not vice versa: we shouldn’t force our breath to match our recitation. The common suggestion of counting breaths often causes “broken breath” since people wait until they count the next number before inhaling or exhaling.

After the initial lecture concluded, the participants began the first meditation sit of the day. It was clear that everyone was trying to incorporate all of Marty’s tips at once. After the bell sounded, ending the first sit, Marty imparted his observations.

“I noticed that some of you were doing what we call ‘the sick chicken’. This happens to even advanced meditators. It’s is when you end up doing this.” Marty closed his eyes, tipping forward and then back again, like a fishing pole dips up and down in water. “This is why it is very important to make sure that your eyes are not completely closed, or else you start falling asleep. For those who were aware that they were doing ‘the sick chicken,’ can share why you think this is happening?” The common answer to this was because of not sleeping enough or well enough. After additional questions and tips, Marty’s lecture concluded.

After lunch, Jin Chuan Shi shared words from Chan Master Han Shan to explain the purpose of reciting mantras, mentally or verbally, in forms of meditation: “Master Han Shan explains how having mantras or other supplemental practices is beneficial, especially ‘when we meet deeply ingrained habitual tendencies and obstacles.’” Essentially, mantras help ground the wandering mind and fluctuating emotions, which is particularly helpful in meditation. Jin Chuan Shi related his experience with the Shurangama Mantra. When he felt lost as a college student, he would recite the Shurangama Mantra three times: “I found that the mantra has a way of clearing away false thoughts—kind of like a vacuum cleaner.” He continued that reciting any mantra requires being grounded in virtue and holding the precepts. Mantra recitation serves as an aid in maintaining clarity of mind and transforming ourselves and the world in ways that we often cannot see or verbalize.

To provide the participants with a hands-on experience, Jin Chuan Shi introduced the Shurangama Mantra Heart, which was printed, hand-cut, and laminated onto little yellow cards by the DRBU Campus Life team. 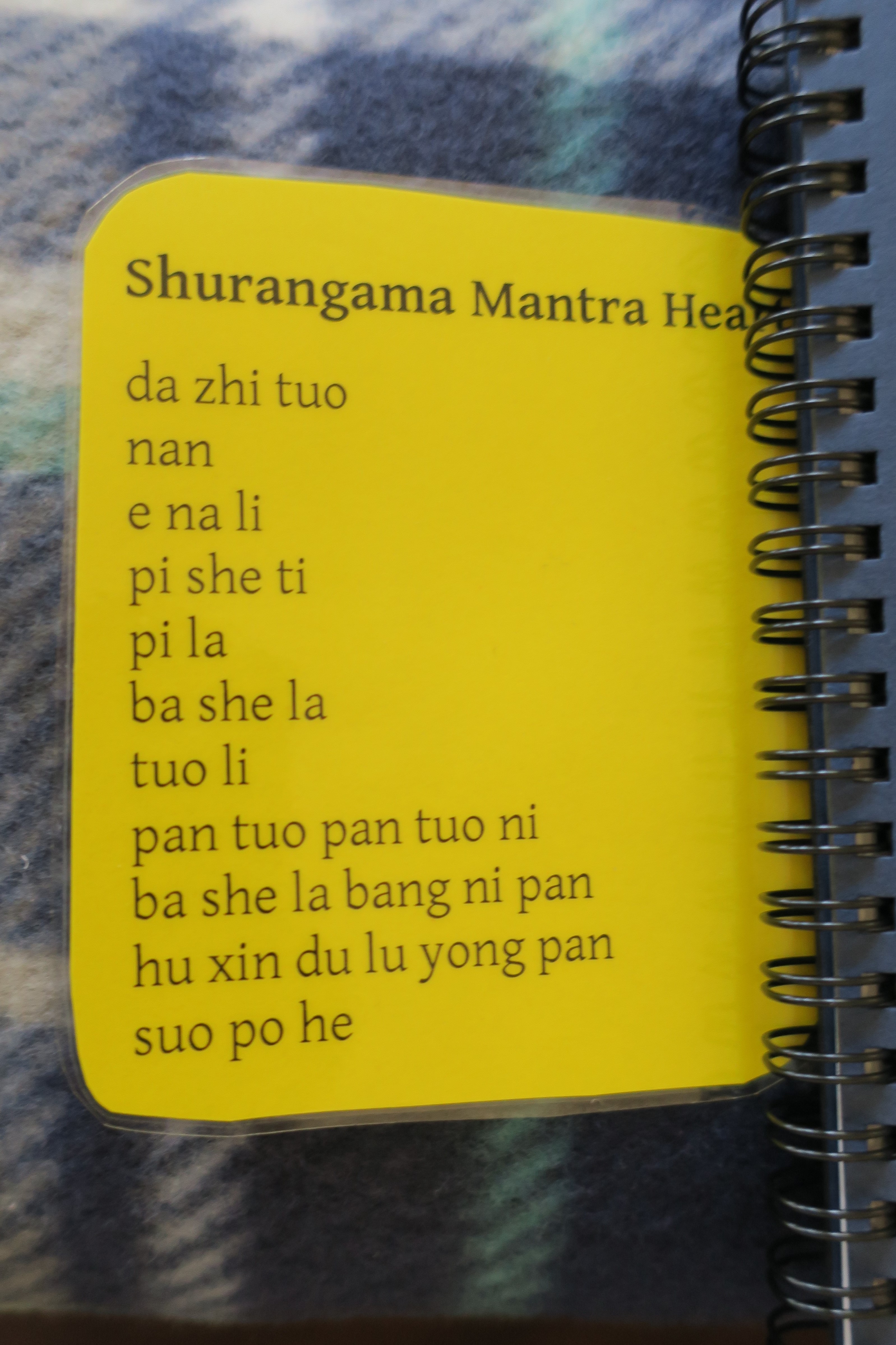 Jin Chuan Shi described that the Shurangama Mantra Heart is relatively short and easy to memorize. He demonstrated how the mantra sounded. He started out with a relatively monotone, consistent chant of “da zhi tuo nan e na li pi she ti,” voice soaring higher in pitch for “pi la ba she la tuo li,” with “pan tuo pan tuo ni” cueing the slight falling in pitch like raindrops pattering against a window. Again, a relatively monotone “ba she la” dipped in pitch for “bang,” jumping back up on “ni pan,” back down on “hu xin du lu yong pan,” emphasizing “du lu,” rising on “yong pan.” The mantra ended on the relatively staccato “suo po he” immediately linked back to the beginning of the short mantra.

“Let’s try chanting this twenty-one times.” The participants grabbed their yellow cards and chanted along with Jin Chuan Shi as he played the wooden fish and the bell to keep everyone on the same pace. After the last drawn out “suo po he,” the room settled into silence. “Okay, now we’re going to sit for a few minutes and for those who wish to use this time to memorize the Shurangama Heart Mantra can do so.” Several students pored over the mantra, closing their eyes to memorize, peeking when needing a hint. Afterwards, Jin Chuan Shi rang the bell and the sit ended.

He then led everyone in walking meditation while chanting the Shurangama Mantra Heart, walking out of the Chan Hall and into the DRBU Multi-Purpose Room, an open area with high ceilings. The participants walked while chanting the Shurangama Mantra Heart over and over. During the recitation, the acoustics of the high ceilings amplified the musical mantra, inspiring participants to recite more confidently and passionately. Everyone continued reciting while filing back to the Chan Hall, ending with a drawn out “suo po he” in the Chan Hall.

From this, everyone went into another meditation sit. Once the sit ended, Jin Chuan Shi asked what people’s experiences were. People shared that the Shurangama Mantra Heart was useful in quieting the mind and that their sit in the afternoon was more focused than the sit in the morning.

One of the last activities for the retreat was a shared inquiry on excerpts from a talk by Ajahn Chah about seeing things the “way things are” with the Dhamma Eye. The participants split into two groups with members of the Campus Life team leading the discussions. A passage that resonated with multiple students was Ajahn Chah’s description of Buddha’s words on “Enlightened Ones.” The passage read:

This passage led the participants to have a better understanding of the concept of what is meant by “letting go” in self-cultivation and meditation. During meditation, participants often noticed afflictions and frustrations arising. We are often told to simply “let go” of deeply ingrained habituations and afflictions, yet have great difficulty even facing these thoughts. Ajahn Chah’s quotation provided a simple, tangible analogy. We must cultivate everyday in order to ultimately reach a state in which we no longer let our fears, afflictions, or attractions bog our lives down in the way they do now. This enlightened state is one in which defilements and afflictions do not affect the body, spirit, and mind in the way that the “leaf doesn’t become damp” from defilements.

The retreat ended with a closing reflection by all the participants. Many imparted that the shared inquiry in the afternoon perfectly concluded the day of meditation. Some reflected on how they felt their consciousness shift after a day of practice, feeling grounded and peaceful. Others were happily surprised by the effects of reciting the Shurangama Mantra Heart together. At the end, there was an enthusiastic, unanimous wish to have future daylong retreats.

The DRBU Self-Cultivation Program is an initiative that aspires to help students make their entire DRBU experience an opportunity for self-transformation. A key component to this is developing an inner stability that can be used as the ground for observing and mastering emotions, thoughts, and habits. In order to support this, this program provides regular practice periods, check-ins, informal gatherings, and daylong practice sessions.