Abhayagiri Finds a Home at CTTB

On Monday, October 9, 2017 at 2am, fourteen monks and twelve laity evacuated Abhayagiri monastery as they saw the blaze and smoke from the raging Redwood Valley Fire. Explosions from propane tanks could be heard in the distance. Internet and phone access was also down making external communication impossible. In the midst of the turmoil, they had to make some difficult decisions without having a complete picture of what was going on.

The group heard that they had to go north on Tomki Road—a rough four-wheel drive road with seven creek crossings and no bridges. They feared that their vehicles would not be able to make the trip; however, they had heard that Tomki Road to the south was engulfed in flames and inaccessible, so they had no choice but to go north with the vehicles they had. After a difficult journey where one of their vehicles had to be left behind, they made it to the evacuation center that had been set up in Willits. 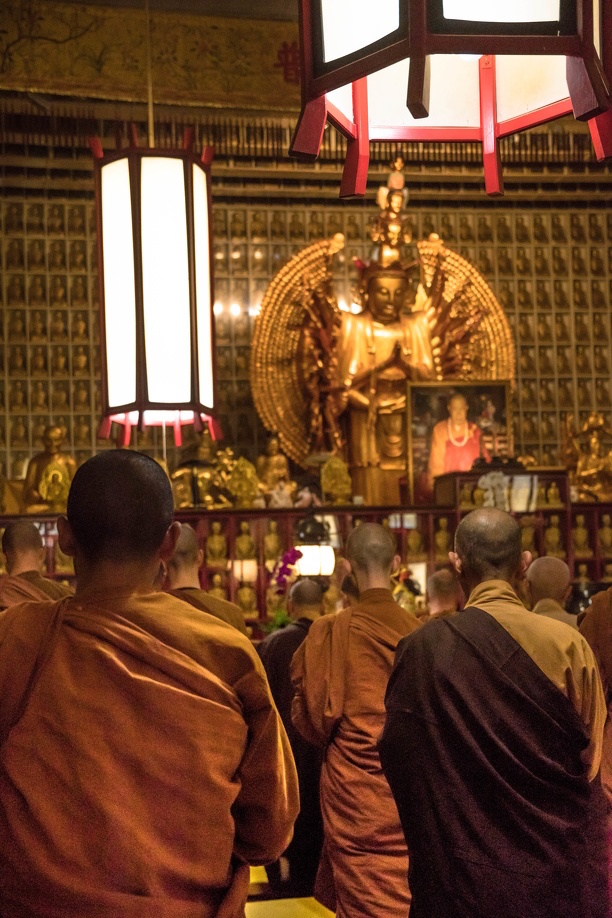 During this time, news of the fire and the possibility of Abhayagiri evacuating had made it to the City of Ten Thousand Buddhas around noon. The CTTB Abbot, DM Heng Lyu, concerned for the Abhayagiri community’s well-being, extended an invitation welcoming them to come to CTTB. CTTB contacted Luang Por Pasanno who happened to be visiting Temple Forest Monastery in New Hampshire for their Kathina Ceremony. However, since many of the cell phone towers were damaged by the fire, there was no way to contact the Abhayagiri evacuees directly.

After some time, Luang Por Pasanno was able to communicate with Ajahn Jotipālo, the senior Abhayagiri monk who was leading the evacuated group. Luang Por Pasanno recommended the group go to CTTB as a refuge from the fire. Given the road conditions, however, the Abhayagiri community could not make it all the way to CTTB that day, so they spent a night at the Three Jewels Dhamma Hall, a small meditation center in Fort Bragg.

The Abbot greeted the Abhayagiri community when they arrived, and there was a palpable sense of joy from everyone. Tired from all the travel, the group was shown to their residences to get some rest: the monks and laymen stayed in Great Compassion House; the laywomen stayed in C-dorm.

The spirit of having the Abhayagiri community at CTTB was like a family reunion. Master Hua had established a Dharma friendship between the Thai Forest tradition and DRBA and had especially praised their strict adherence to the Vinaya. Over the years, this friendship has grown through shared ordinations, ceremonies, and teachings. Yet this was the first time the two communities lived so closely together.

At CTTB, the Abhayagiri monks were respected and supported in their Vinaya and training. In addition to maintaining their own practices, they joined fully in the life at CTTB: attending daily ceremonies, sharing the noon meal, and giving Dhamma talks at IGDVS and DRBU. 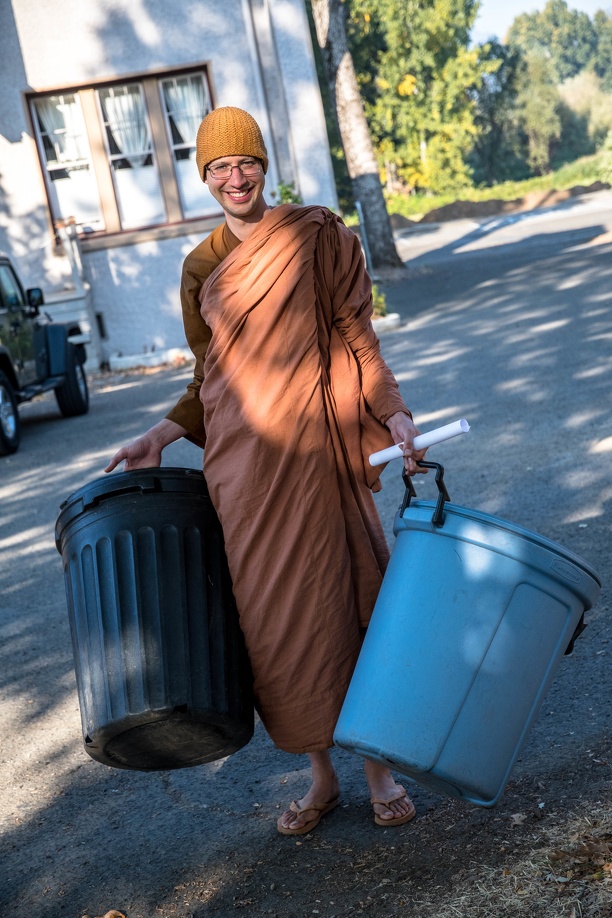 Ten or more forest monks attended morning ceremony, meal offering, and evening ceremony almost every day. Luang Por Pasanno, after arriving at CTTB on Wednesday evening following a long flight from the East Coast, attended the 4am morning ceremony the very next day. Curious about the daily CTTB practices, the Abhayagiri monastics asked many questions: Does everyone make Bodhisattva vows? How to bow properly from standing? Why do the CTTB monks rinse out their bowls after lunch and pour it on the ground?

Wanting to minimize the work for CTTB residents, they also asked: “Where do we take out the trash? Not just within the building, but all the way to its final destination so others would not have to do the work. How should we wash the bowls, plates, and utensils? We wish to minimize the setup for the CTTB monastics.”

Even while living as evacuees, the Abhayagiri community scheduled work periods that began with Dhamma reflections. Luang Por Pasanno explained how the Buddha trained his monastic disciples to pay careful attention to the upkeep of their requisites and living area. The sight of twenty monastics and laity mindfully cleaning the Great Compassion House, DRBU Building, and Sudhana Center inspired both CTTB residents and DRBU staff and students. Work clearly was an integral part of their spiritual practice.

Their gatherings were also held in an atmosphere of mutual respect and harmony. People placed their palms together before speaking to seniors, and they listened to each other without interrupting. Mindful and considerate speech was also part of their training.

The Dhamma and Vinaya served as the bedrock for the community’s daily life and practice. Despite the possibility that their monastery may have burned, they maintained a constant equanimity. In their Dhamma teachings at CTTB—Luang Por Pasanno in the CTTB Buddha Hall and Ajahn Siripañño in DRBU—there was the constant theme of taking every moment as an opportunity to practice. Everything is impermanent. The state of Abhayagiri is “not for sure.” It is the nature of fire to burn; having a monastery in a forest means there is always a possibility of a forest fire. There is no use getting angry at the trees or the fire. If the monastery did not burn this time, it would burn at some future time. That’s just the way things are: impermanent. 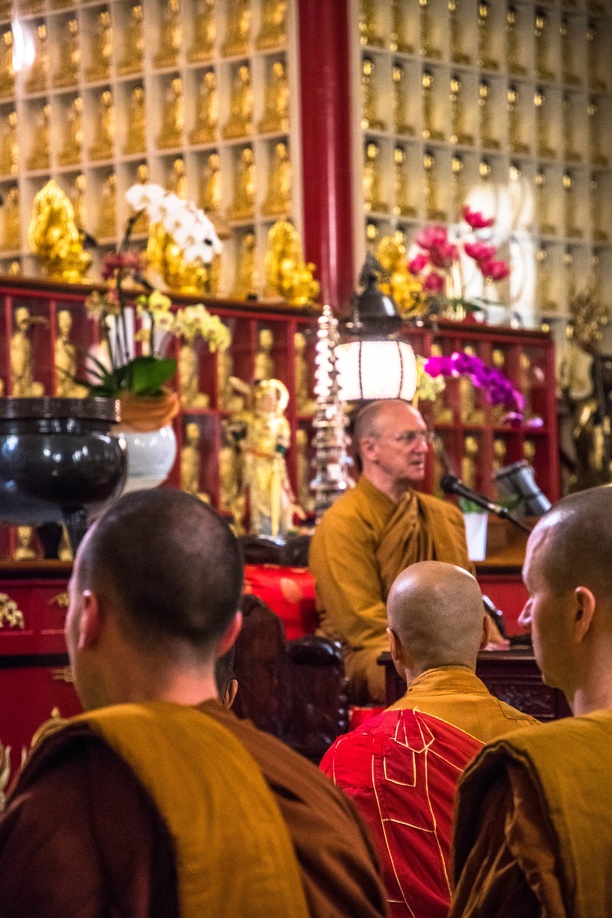 The Abhayagiri community did not embody this reflection on impermanence in a cold and unfeeling way. Rather, they demonstrated an open-hearted sensitivity. Special care was paid to the laity  who had lost their homes and possessions. With a gentle and warm sense of support, the monks recited Pali chants of blessings and protection on their behalf. As they chanted, one laywoman’s eyes filled with tears. “Tears of joy,” she said. “Tears of sadness to tears of joy.”

On Tuesday, October 17, the Abhayagiri community returned to Abhayagiri monastery. After the Tuesday noon meal, the entire community paid their respects to the CTTB Abbot, DM Heng Lyu. They expressed their gratitude and appreciation for being able to take refuge at CTTB. DM Heng Lyu responded that they were welcome to stay at CTTB anytime and to consider CTTB their home.

Although the Abhayagiri community only stayed at CTTB for a week, both communities felt they learned a great deal from each other. Ajahn Jotipālo shared in his final words in the Buddha Hall saying that staying at CTTB had been a great experience for the Abhayagiri community. Although they have heard stories from Ajahn Sumedho and Ajahn Amaro about connecting with Master Hua and the City of Ten Thousand Buddhas, Ajahn Jotipālo felt that this was a new beginning, a renewal of the relationship between Abhayagiri and CTTB.