Reflections on the Openness of Thinking: Hannah Arendt in conversation with philosophy - Katharina Kaiser, U. C. Berkeley

Abstract
“We are what men always have been—thinking beings”, Hannah Arendt states in her posthumously published (unfinished) book The Life of the Mind. And yet our thoughtlessness contributes to much evil in the world—the rise of totalitarianism, the Holocaust, the widespread attacks on civilian populations during her own lifetime. It may also be discerned in the increasing levels of alienation in contemporary societies struggling to cope with rapid scientific and technological transformation.

My talk aims to show how Arendt’s analysis of ‘thinking’ is tied to her underlying plea for amor mundi (love of the world). This becomes apparent in her Kant-inspired exemplary (re)modeling of Socrates in the market place. I will focus on some key aspects in her endeavor to chart the openness of thinking in its connection to language. Particular attention will be paid to the roles of metaphor, imagination, and the ineffable. Some of the underlying Kantian, Nietzschean, Heideggerian, and Pre-Socratic perspectives that Arendt draws upon, both in support as well as in oblique criticism, will also be explored.

I will conclude with a few words on Arendt’s ‘sort of phenomenological’ orientation, which freely integrates genealogical and existential aspects in a deliberately ‘non-professional’ conversation with ‘philosophy’.

Speaker Biography
Katharina U. Kaiser is Continuing Lecturer in the Department of Philosophy at UC Berkeley. She studied philosophy and literature, as well as physics and the history of science, at the Universität Hamburg in Germany, where her academic career began with teaching and research positions in philosophy and German studies. She arrived at UC Berkeley after affiliations with Princeton University, the University of Pennsylvania, the Australian National University, and the Humboldt-Universität zu Berlin. At Berkeley she has offered courses on figures in post-Kantian philosophy (Schopenhauer and Nietzsche) and 20th century German philosophy (Heidegger, Adorno, and Hannah Arendt), as well as on a range of topics in aesthetics and the theory of art. Collaborations with philosophers in Europe have led to regular extended stays in Germany. Currently she is developing a critical theory of communality and the foreign, inspired by Hölderlin, that also incorporates influences from Hannah Arendt. 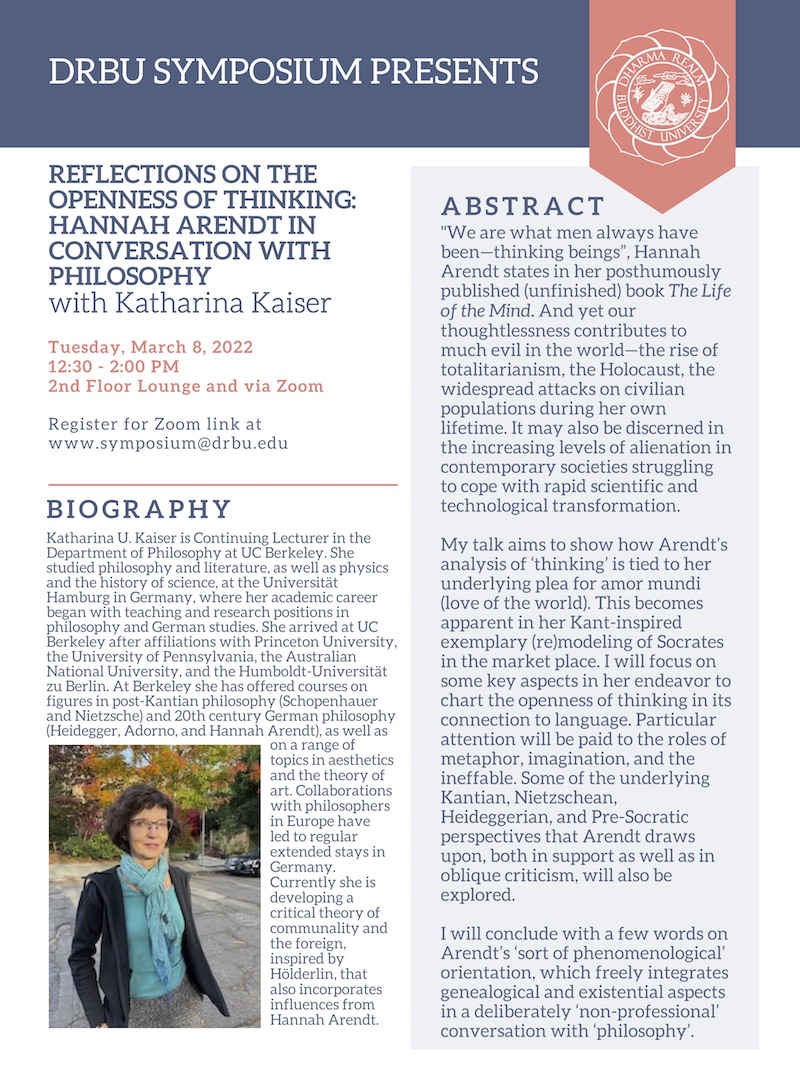