Abstract
The three-hundred-year period spanning the sixth to eighth centuries of the Common Era was a time of Buddhist predominance throughout the area known as Greater Gandhāra, which encompassed modern Afghanistan and parts of Pakistan and Northern India. A testimony to the strong Buddhist influence in this period, numerous manuscript materials from this time and area have been uncovered throughout the last century and are still appearing into the present. These manuscripts were copied in two distinct scripts, Gilgit/Bamiyan Type I (sometimes referred to as Round Gupta Brāhmī) and Gilgit/Bamiyan Type II (also known as Protośāradā) and may be referred to collectively as ‘Gilgit/Bamiyan Type Manuscripts’. They were produced on birch bark folios with carbon-based ink by an unclear number of what appear to have been professional scriptoriums located variously around Greater Gandhāra, where they were eventually found in caches. The content of the manuscripts comprised Buddhist works of both Mahāyāna and Mainstream views. Taking examples from a number of collections of these Gilgit/Bamiyan Type Manuscripts, including new discoveries from the ancient Buddhist city of Mes Aynak, in this talk I will discuss the nature of Buddhist textual sources transmitted in the area of Greater Gandhāra and the practices surrounding their use and creation in the region. This will include observations on the methods and techniques employed by scribes in the copying of these manuscripts, the production of the birch bark folios that made up the material support of the manuscripts, and the spread of these manuscripts both within Greater Gandhāra and beyond.

About Dr. Charles DiSimone
Charles DiSimone is FWO Postdoctoral Researcher at Ghent University. He received his doctorate from Ludwig-Maximilians-Universität München and has held positions at the Buddhist Digital Resource Center, LMU Munich, and Mahidol University. His research primarily focuses upon the applications of philological, codicological, and critical analysis of Buddhist sūtra manuscripts and literature, both Mahāyāna and Mainstream. He works with Buddhist literary traditions in a number of languages and has a keen interest in the translation of this material. His most recent research surrounds the analysis of new discoveries of manuscript materials created in Greater Gandhāra. Recent publications include research on scribal practices in the Gilgit area and Greater Gandhāra and a book on the (Mūla-)Sarvāstivāda Dīrghāgama manuscript (Wisdom 2022). 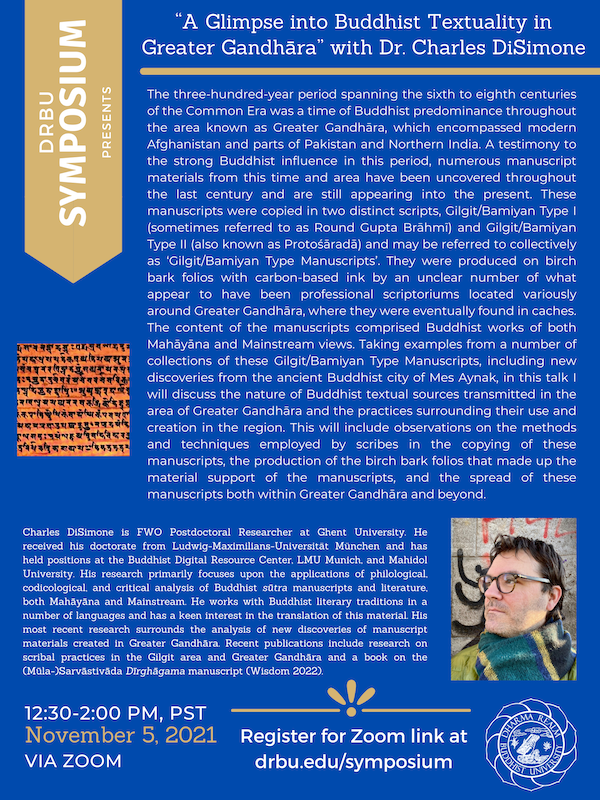