We regret to inform you that the summer seminar will not be offered in 2017 due to scheduling constraints. Please check back next year. 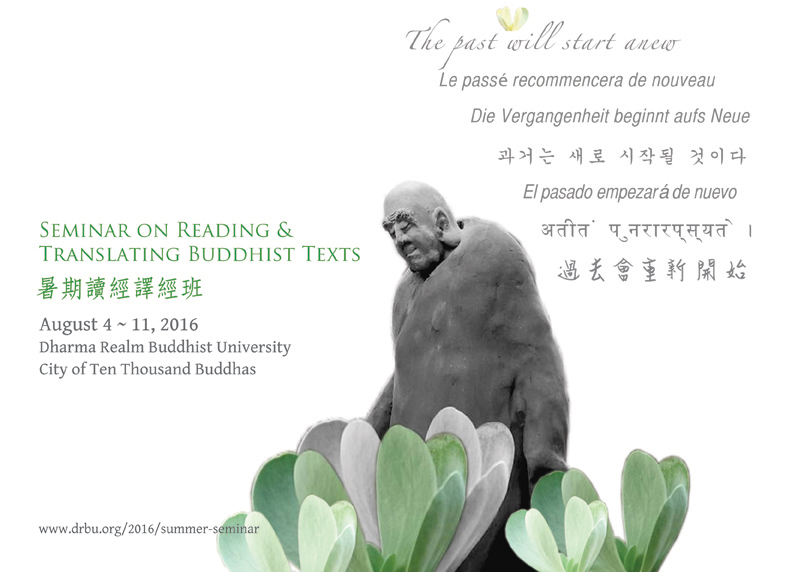 This seven-day seminar held in the peaceful setting of a Mahayana Buddhist monastery in Ukiah,  California—the City of Ten Thousand Buddhas, will introduce participants to early Buddhist literature. This year, the seminar will offer six tracks of Buddhist text translation:

(A) From Classical Chinese to English;

(B) From Classical Chinese or English to Spanish;

(C) From Classical Chinese to Korean;

(D) From Sanskrit to English;

(E) From Classical Chinese, English, or Sanskrit to German; and

(F) From Classical Chinese, English, or Sanskrit to French

Working with Buddhist monastics who are experienced translators, participants will read a selected work and related commentaries.

1. Those applying to (A) or (C) should have at least one year of Classical Chinese before taking this course. A limited number of exceptions will be granted to interested applicants to (A) who are qualified in other ways.

2. Those applying to (B), (E), or (F) should either be native Spanish, German, or French speakers or have some experience reading literary texts. Knowledge of English, Chinese, and Buddhism are preferred but not required.

3. Students who apply to (D) should have learned basic Sanskrit grammar and have some experience reading texts beyond a primer.

Barbara Waugh is a Faculty member at Dharma Realm Buddhist University where she currently teaches Sanskrit. She first taught Sanskrit at DRBU in 1976. She holds a B.A. in Religious Studies and an M.A. in South and Southeast Asian Studies from the University of California, Berkeley, as well as a B.S. in Nursing from Pacific Union College. She taught ESL to Southeast Asian refugees at the Buddhist Refugee Rescue and Resettlement Program in Talmage in the early 1980’s. While teaching Sanskrit at DRBU she worked as a nurse in Mendocino County for over 22 years and holds licenses as an R.N. and a Public Health Nurse. She has been a lay disciple of the Venerable Master Hsuan Hua since 1970 and lives in Talmage with her husband.

Bhikshuni Heng Chih, a monastic disciple of Master Hsuan Hua, has been fully-ordained in the Mahayana tradition since 1969. She holds a PhD in Translation of Buddhist texts from Dharma Realm Buddhist University (DRBU). In 1970 she began giving on-the-spot translations of Master Hua’s oral tradition lectures on the sutras. From the 1970’s to date she has served the Buddhist Text Translation Society as a member of all four committees. After six years as an adjunct assistant professor of Buddhist Philosophy at Bond University in Gold Coast, Australia, she returned to California in 2014 to join the faculty of DRBU and is currently an active emeritus professor.

Bhikshuni Heng Yin grew up in Austin, Texas. She was ordained in 1992 under the guidance of the late Venerable Master Hsuan Hua. She holds an MA in Translation of Buddhist Texts and an MA in Buddhist Classics from Dharma Realm Buddhist University, as well as an MA in Asian Studies from UC Berkeley. In addition to working on various translation projects for the Buddhist Text Translation Society, she served for twelve years as Girls’ Division Principal of the Instilling Goodness Elementary School and Developing Virtue Secondary School at the City of Ten Thousand Buddhas. She teaches Classical Chinese at Dharma Realm Buddhist University.

Lauren Bausch holds a PhD in South and Southeast Asian Studies from the University of California, Berkeley. A faculty member since Fall 2015, she teaches Sanskrit and Indian Classics at Dharma Realm Buddhist University. Her areas of interest include late Vedic and early Buddhist literature and philosophy.

Mr. Won Kyu Jung holds a B.A. in Chinese from Kyungpook National University and served as a civil servant in Korea and China from 1983 to 2011. Afterwards, he taught Chinese language and culture at Gyeongnam Provincial Namhae College until 2013. Mr. Jung is an active and renowned Buddhist translator in Korea. His translation work includes Exhortation of Cultivating Mindfulness of the Buddha by Master Yuanying 圓瑛 (2008), Anthology of Selected Instructional Talk on Pureland by Master Yinguang 印光 (2014), and Dharma Talk by Chan Master Xuyun 虛雲 (2016). Mr. Jung has translated the following teachings of Venerable Master Hsuan Hua 宣化: Commentary on the Shurangama Mantra (2009), Commentary on the Shurangama Sutra (2012), Shattering Space and Understanding the Mind Ground (2013), The Western Land of Ultimate Bliss Is Your Home (2014), and Selected Dharma Talks (2015). Currently, Mr. Jung is translating Master Hua's Commentary on the Lotus Sutra.

Dr. Chris Wen-Chao Li received his masters and doctoral degrees in General Linguistics and Comparative Philology from Oxford University, where his research focused on Mandarin sound change and Chinese phonology. He is the author of A Diachronically-Motivated Segmental Phonology of Mandarin Chinese (New York: Peter Lang, 1999), The Routledge Course in Chinese Media Literacy (London: Routledge, 2016) and numerous scholarly treatises on language and translation. His translations of Chinese prose and poetry have appeared in Renditions (Hong Kong) and The Chinese Pen (Taipei). His current research interests include sound change, language contact, diglossia, standardization, phonological translation, Chinese romanization systems, and the phonological description of Mandarin Chinese varieties.

Fedde M. de Vries, originally from the Netherlands, has been an active volunteer for Buddhist Test Translation Society since 2009. He holds a BA in religious studies from Leiden University with a focus on Buddhism and a MA in Asian Studies at UC Berkeley. He works mostly with Chinese and Sanskrit although over the years he has studied a number of languages such as Latin, French and Japanese. Since 2009, Fedde has been involved with the community at the City of Ten Thousand Buddhas since 2009. He has participated in various translation projects including parts of the Avatamsaka Sutra, the Lotus Sutra, biographies of the Patriarchs, and instructional talks by Master Hua. His translation of the Sutra to King Malla has been published in Religion East and West. Besides Buddhism, Fedde is interested in a variety of religious and philosophical traditions as well as Western philosophy. Currently, his focus is on Tang dynasty Buddhist philosophy.

Lina Verchery is a filmmaker and doctoral candidate in Buddhist Studies under the Committee on the Study of Religion at Harvard University. Her research centers on dynamics of agency, authority, and self-cultivation in contemporary Chinese Buddhist monasticism, especially throughout the Chinese diaspora. Lina holds a B.A. Honours in Religion from McGill University and an M.Div. in Buddhist Studies from Harvard Divinity School. Her award-winning films range from documentary to experimental, including several films on religious topics, such as La Trappe/The Trap (National Film Board of Canada, 2008), The Outdoor Church (Harvard Film Studies Center, 2011) and In Ordinary Life (Sensory Ethnography Lab, 2013).

Lotus Lee is a graduate of Santa Clara University, where she obtained a BA in chemistry and minored in religious studies. She obtained an MA in religious studies from Stanford University with concentration in Chinese Buddhism in 2013. She has served as a regular interpreter during weekend events at Gold Sage Monastery and a translator for Dharma Realm Buddhist Association’s monthly journal Vajra Bodhi Sea. She is currently a first year MA-PhD student at UC Santa Barbara studying Chinese Buddhism in the East Asian Language and Culture Studies Department.

Michael Lu is a rising sophomore at Stanford University. A graduate of Developing Virtue Secondary School, he translated Chinese Buddhist texts and teachings for 6 years under the guidance of Bhikshu Jin Fan. He also took a few classes in Sanskrit at DRBU and he is currently learning German in college. He has been involved in various translation projects, including Dharma Realm Buddhist Association’s monthly journal Vajra Bodhi Sea and the Lotus Sutra with Venerable Hua’s commentary. His area of focus is consecutive Chinese-English interpretation, and he serves as a regular interpreter during evening talks at the City of Ten Thousand Buddhas and weekend lectures at Gold Sage Monastery.

Shiying Pang grew up in Mainland China. She received her BA and MA in History from Fudan University, with an emphasis on Chinese Buddhist history and thoughts. She received another MA in East Asian Studies from University of California, Santa Barbara in 2009. Now she is a PhD candidate in Group of Buddhist Studies, at University of California, Berkeley. Her academic interest focuses on the reception of prajnaparamita literature in medieval China.

Bhikshuni Heng Yi grew up in Taiwan and was ordained in 1995 under the guidance of the late Venerable Master Hsuan Hua. She holds an MA in Asian Studies from California State University - Long Beach, and a PhD in Buddhist Studies from UCLA. Since 2011, she has been an Assistant Professor at Dharma Realm Buddhist University, teaching courses on Mahayana sutras and shastras. She has been a translator, reviewer, and translation team leader for the Buddhist Text Translation Society. She aspires to help develop a Buddhist Text Translation Institute as a space for those with talent in languages to be trained and to translate Buddhist texts as a form of spiritual practice.